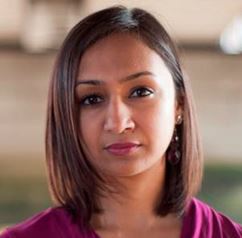 Roma Agrawal explains that although engineering is still a male-dominated industry, more women are now being encouraged into engineering fields.

Roma Agrawal was always encouraged to think about engineering as a career. Both her parents came from engineering and science backgrounds and, as a little girl, she was forever playing with construction toys. “I’ve always naturally liked sciences,” she says. “And I had fantastic teachers who showed us how amazing and creative physics and maths can be.”

After studying at Oxford, and then finding work experience with engineers who were designing particle accelerators for CERN, Roma began a career in structural engineering, designing bridges and skyscrapers, spending six years working on The Shard in London, the tallest building in Western Europe. Her star has been rising ever since and she has a growing media profile; plus she spends a lot of time promoting careers in science and technology to young people.

She is, however, a woman working in a man’s world. Engineering is still a career that is over-populated by men — although, she insists, in terms of gender balance, things are improving slowly. “I’ve been in the industry for 10 years and in that time have seen an increase in the number of female engineers,” says Roma. “I get a lot of emails from young women who are studying at GCSE or A Level asking about career opportunities in the profession; so there is an increased awareness that this is a field where both men and women can be successful. There’s still a long way to go — but it’s going in the right direction, so I’m optimistic.”

Roma insists that she has always enjoyed the same opportunities as her male colleagues. “If you work hard, it doesn’t matter what your background is, what gender you are, what culture you come from. Be passionate about it and show that you enjoy it — that’s all that matters. When you are in a minority in a profession, you have to be confident. And if you aren’t, fake it! Put a smile on your face, go into a meeting, make your case — and you will be listened to.”

‘Engineering’, she points out, is a vague term. “It encompasses so much — everything from designing skyscrapers to working on the Mars Rover, to designing nano-robots — it’s a completely open, endless and exciting field. Yet people have a very narrow view of what it is.”

To break down stereotypes, various initiatives have been launched to encourage women into the industry and highlight female role models, such as the Your Life campaign, of which Roma is an ambassador. This is a three-year campaign to encourage young people in the UK to study maths and physics at A-level. These subjects will help students build the skills needed to succeed in the current competitive global economy. “It’s vital to show female students that they can be engineers,” says Roma. “There are also initiatives where women from the industry go into schools and engage with teachers and parents. That’s particularly important because they have a huge influence of the choices that children make. I worry that, at a young age, girls make a decision that science and maths isn’t for them; so they drop those subjects and, without even realising it, create a huge barrier to pursuing a STEM (science, technology, engineering and maths) career in the future.”