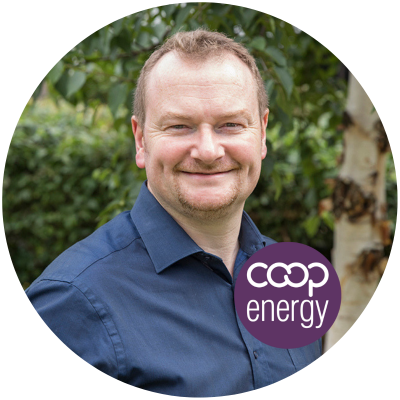 Local people who drive community energy schemes must be paid a fair price for the power they generate and receive proper support from government, says one renewables expert.

The project generated a lot of interest because Westmill was the first fully operational, 100% community-owned, onshore wind farm to be built in the south of England. It was also a perfect illustration of environmentally-aware local people working together to generate renewable power and promote energy efficiency.

For the good of the planet, community-owned energy projects should be properly encouraged and supported, insists Mark Billsborough, Head of Trading and Renewables at energy supplier Co-op Energy.

“A community scheme can start off as three people in a pub who say: ‘Let’s do this!’ The trouble is it can be hard to know where to go or what to do next. A project like this is a big undertaking.”

That’s where energy suppliers come in. “We don’t give communities funding for their renewable schemes,” explains Billsborough. “Instead, we offer guidance and help to make connections. A lot of these schemes are co-operative in nature, so we give local people access to experts, and other community groups who have gone through the same process, to help ensure previous mistakes are learned from. The great thing about the community energy sector is how co-operative and community driven it is, everyone is happy to share information and expertise.

Once a scheme is operational, Co-op Energy buys energy from the community and sells it to their customers.

Government support mechanisms have been cut

“Smaller and medium-sized community schemes have been impacted because the Feed-in-Tariff (a government initiative supporting community energy and small-scale renewable schemes by providing payments for surplus energy exported to the grid) has been closed to new entrants.”

“Any obligations on suppliers to pay fair market prices for energy are relatively weak,” explains Billsborough. “Changes to support mechanisms and the market have pulled the rug out from under almost all renewables — except for offshore wind which can still claim certain support mechanisms, which is obviously not an option for communities.”

Suppliers must do more to facilitate community schemes by paying “an open, honest and fair market price” for the energy they buy, says Billsborough. They should also keep pricing simple so that it’s easy to compare their offer against those of other suppliers.

Ofgem’s Targeted Charging Review could be damaging for smaller projects

He’s also concerned that Ofgem’s proposed electricity charging reforms could hurt the future of renewable energy projects. “There seems to be a lack of strategy in energy generally. We’re getting to a tipping point where old renewable energy assets will need to be rebuilt. A lack of economic drivers means we could see a reduction in renewable energy in the UK.”

This is especially true for onshore wind in England, which since 2015 has had an effective planning ban. “This truly is a political move which does not chime with public opinion. Onshore wind is one of the cheapest forms of electricity generation, it’s truly bizarre that community groups aren’t allowed to build wind farms in England at the moment

Billsborough remains cautiously optimistic, however. “Fundamentally, the people involved in the community energy sector are pretty resilient,” he says. “They’re also very innovative and will find ways to do things that may not have been done before. However, we need to see a clear strategy from the government which gives community-energy the support it requires and allows this innovation to flourish.